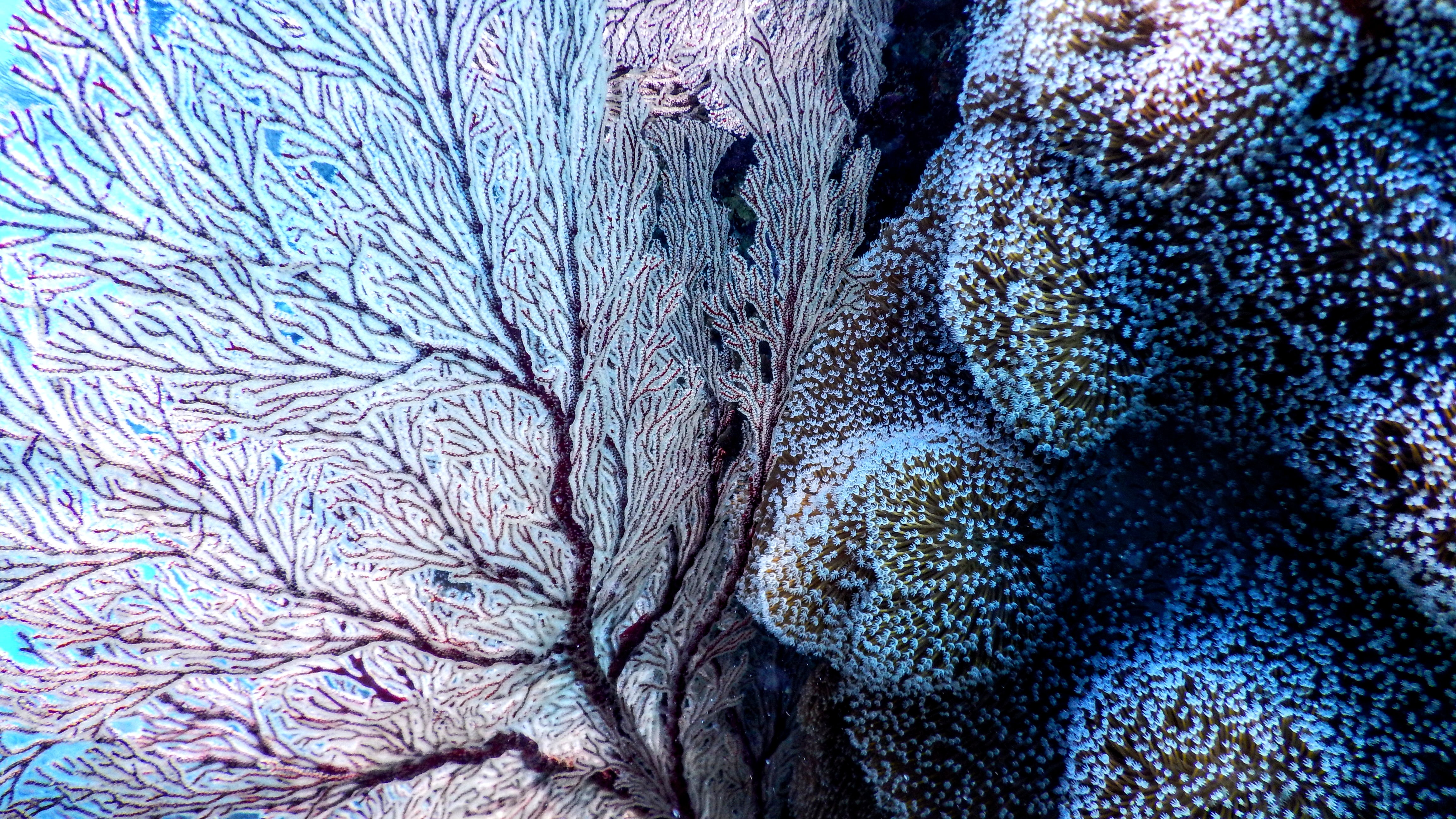 We are seeking coral experts to collaborate with us on an interactive coral reef experience. Additionally, we are looking for a venue to exhibit this work.

Through the Here Be Dragons Conference, we noticed that while compelling research is actively conducted creating amazing data and footage, there is still a need to convey that information to the public in more engaging ways.  We proposed a triptych of experiences ranging from the macro to micro scale.  In this proposal, we are focusing on the projection-mapped coral reef display.

There exist incredible documentaries, like Chasing Coral (2017) and Blue Planet (2001, 2017), that tell the story of climate change and it’s impact on aquatic ecosystems.  While watching Chasing Coral, one notion that particularly resonated was that water that normally was chilly while diving now felt like a ‘bath tub’ during a bleaching event.  During the documentary, one scientist speculates, “I think that a lot of people don’t realize climate change is happening because most of the extra heat generated by greenhouse gases has been transferred to the oceans.”  He goes on to explain that “93% of the heat [from the atmosphere] is going into the ocean…If the oceans weren’t doing this job of absorbing the heat, the average surface temperature of the planet would be 122 degrees Fahrenheit.”

Because not many individuals have the opportunity to visit coral reefs (especially for extended periods of time to witness temperature fluctuations and bleaching events), it is difficult to convey the scale and severity of these changes.  We believe that providing a tangible, at scale experience telling the story of coral reef bleaching and climate change could help guests empathize with the ocean.  Additionally, by thoughtfully crafting the narrative of the experience, guests could leave the experience with actionable solutions and a determined attitude for protecting our planet.  Science communication and storytelling is crucial to inspire the next generation of ocean explorers and activists.  This particular exhibit could bring awareness to an issue that cannot be witnessed by the general public.

Projection mapping is a technique used in themed entertainment to project digital content onto non-standard surfaces by mapping the digital information to regions on the physical surface.  Typically, projections are displayed on white (or light grey/pastel pink for increased contrast).  Because bleached coral tends to be white in color, we can build a bleached coral reef set and project onto that surface.  The projection can ‘restore’ the coral to vibrant colors and also display data directly onto the coral surface.

To interact with the projection, we propose two methods.  First, by running cool and warm water through metal coils, we can allow guests to feel what the surrounding water feels like for healthy and bleached coral ecosystems.   As they touch the warmer coils, the projection would fade away to white to reveal the bleached coral.  As the guest moves their hand back to the cooler coils, the reef would become vibrant again.  Additionally, part of the reef could be designated for informational exploration.  By providing a touch screen kiosk, guests could locate different types of coral on the reef and learn more about their role in the ecosystem.  For example, if a guest selected ‘brain coral’, the corresponding set piece ‘brain coral’ would light up on the reef and the kiosk would display more information about that coral.

Additionally, to help the reef feel teeming with life when healthy, an additional projection in the background of the scene could project schools of fish.  If we want to tell stories about symbiotic relationships between fish and coral, we could use pepper’s ghost or another transparent display technique to place digital fish in the scene with the physical coral.

An interactive exhibit like this would definitely require a venue (especially one that is open to the public).  The New England Aquarium would be, of course, an absolutely incredible and relevant venue, although if that’s not possible, perhaps this could be displayed somewhere on MIT’s campus.

In terms of fabrication, the only unknown currently is at what scale to build this exhibit.  To start, Emily has a small projector and we can 3D print a piece of coral to estimate what scale would be appropriate for this exhibit.  Outside of that, Emily imagines this being fabricated against a wall (to eliminate the need to project on the back of the reef).  The scale of the exhibit would determine how many projectors are necessary to completely illuminate the scene.  For reference, Emily estimates that three projectors would be sufficient to cover a roughly 5’ wide x 5’ tall x 3’ deep installation.  More projectors allow for larger installations.  Exhibit space dictates how large the installation should be.

For an initial miniature mock-up, no additional resources are required.  After that, this installation would need building material and a vendor to fabricate the coral reef.  Concurrently to coral reef fabrication, Emily would write software to projection map onto the surface of the physical reef.  We’ll need a computer to run the software and at least three projectors to cover the scene (although this could be expanded to include more projectors and monitors if we want to include fish and other marine life in the scene).  Additionally, we’ll need to buy materials to build the temperature interaction mechanism and/or a tablet type device for the interactive kiosk. Lastly, if we aim to replicate real coral reefs, we’ll need data and models as reference.

(Depending on the effects and assets required)

Coral fabrication, projection mapping software, and kiosk design and implementation would all happen concurrently so overall, this project could be ready to go between 4 – 6 months depending on the effects/scale (not including coral fabrication yet).

Hey are you guys moving forwards with this project?