by Daniel Oran, Rachel Smith, Dan Novy, Siranush Babakhanova, Brennan Phillips, and Allan Adams
Wheels of Poseidon
·
This Pub is a Supplement to 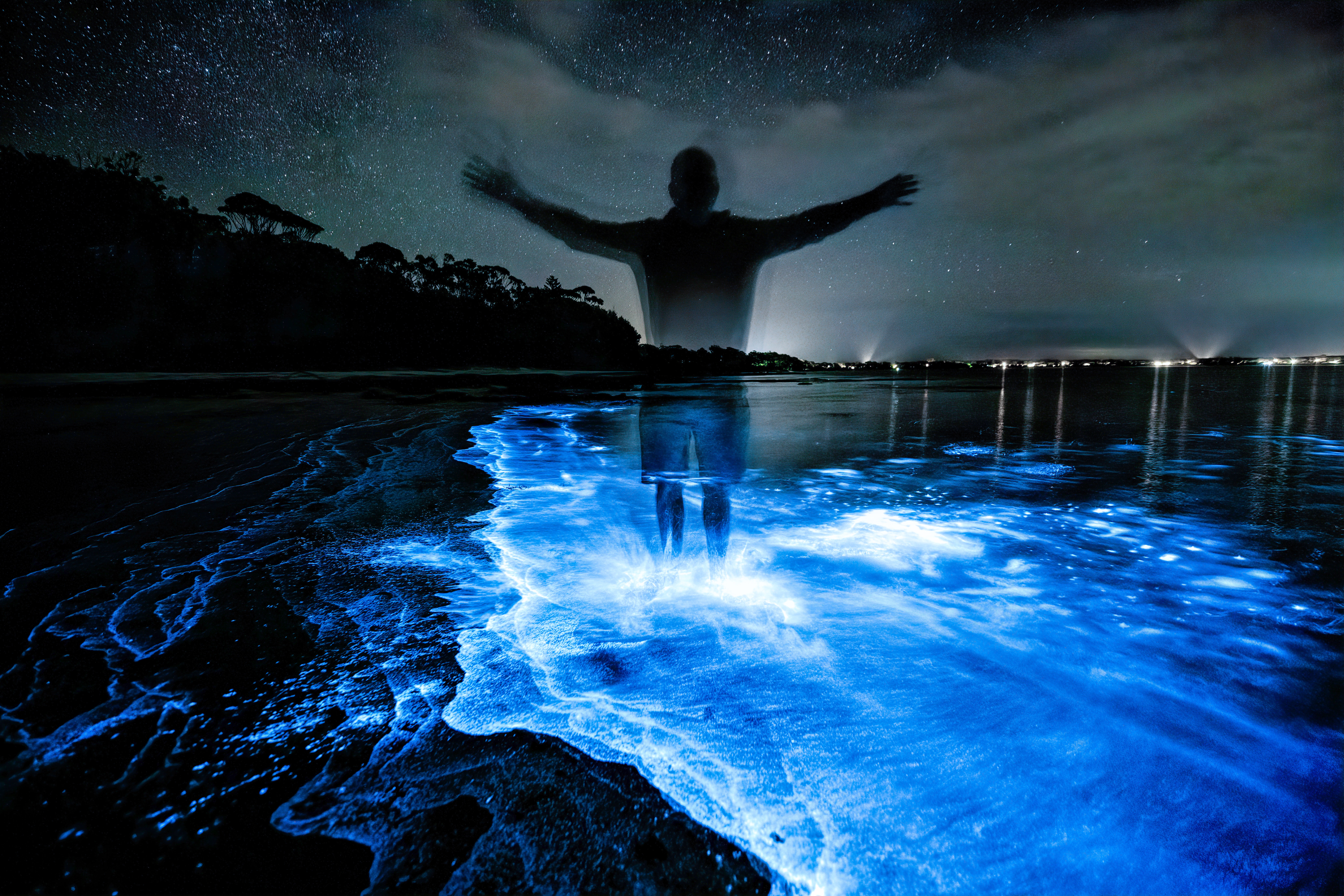 Throughout the ages bioluminescence has inspired myths—and it's no wonder when massive blooms of jellyfish or algae can turn the ocean into a reflection of the night sky rife with stars from the depths. One such wonder has attracted the fascination of mankind for ages. Long ago, sailors in the Indian Ocean have long encountered massive bioluminescent blooms as they sailed through the water, lighting the wakes of their ships like the spokes of a wheel carrying them to their destination in a chariot of wind and water. They called this phenomenon “The Wheels of Poseidon”. Our goal is to harness the beauty of bioluminescence to create a new medium for artistic expression.

Specifically, we submit the challenge of generating a living, programmable bioluminescent display, with pixels and voxels built of bioluminescent plankton floating freely in the water column and stimulated to glow by a programmable pattern of pressure waves in the water.  Doing so requires experts with a wide array of skills sets; through this collaboration we hope to have artistic, social, scientific, and technological impact.

Creating such a programmable bioluminescent display requires merging a biological system (plankton suspended in the water column) with a synthetic control system. The key to controlling this display is that plankton (for example, Pyrosystic fuciformis) glow in response to acoustic waves in the water.  We can thus create localized bursts of light by targeting sound waves to specific spots in our display.  This can be achieved for example by creating a phased array of ultrasonic transducers in open water, or by exciting suitable combinations of standing waves in a tank via transducers arrayed along its walls.  As a first proof of principle, we plan to create a 2D display in a shallow tank, with a dense grid of acoustic transducers embedded in the floor of the tank. Ultimately, however, our goal is to be able to selectively excite a dense volume of bioluminescent voxels to construct a rich variety of 3D shapes and images. Initially this can be achieved in an enclosed lab setup but it would have the potential to be deployed in aquariums or at locations with endogenous bioluminescent algae for onsight usage.

The detailed dynamics by which acoustic stimulation of dinoflagellates induces bioluminescence is the subject of substantial research. For example, it is already well understood that local changes in pressure, generated for example by turbulence, can trigger a bioluminescent response in algae. However, many details of this response are insufficiently well measured for our purposes -- for example, what are the precise frequency and amplitude dependencies of this bioluminescent response in a host of relevant species? To this end, we will create a simple experimental setup (a sealed syringe with a micro-controlled plunger) to measure the bioluminescent output of a column of suspended cells undergoing controlled compression profiles, for example frequency and amplitude sweeps. These data could themselves lead to an academic publication in addition to providing the basis for our engineering approach.

Creating a versatile underwater acoustics platform constitutes a major challenge that we must address. Initially, we will explore how we can utilize standing wave modes generated by an array of piezo transducers to stimulate the dinoflagellates. Then, by analyzing the resulting light patterns with fourier mathematics we can amass a library of potential wave behaviors inside of an enclosed space such as a cube. Alternatively, we can explore methods that eliminate the water boundary condition to allow for a more traditional phased array. To do this we would create a submersible containment-unit which is impedance matched with water such that when placed in a larger body of water, it can be treated as a continuous medium. One attractive attribute for this approach is that it could be deployed in the open ocean or bioluminescent bays.

To observe the system we are creating we will harness our team's expertise with extreme low light imaging systems. As we progress with our prototypes it will be possible to test the efficacy of various underwater camera systems. This research could then be born out in the field for imaging endogenous bioluminescent events for scientific research.

Lastly, there are very few means with which it has been possible to create volumetric displays, holographic or otherwise. As a result this platform would expand that vein of research into the realm of hybrid biological synthetic systems.

How large a bloom counts as massive?
Signed, a jellyfishphobic